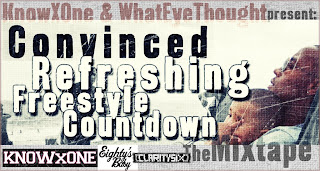 My boy Knowxone put me on to Convinced. For like 20 something days straight, this dude would have a new freestyle until his mixtape dropped. Well his mixtaped dropped and at first I wasn't convinced on Convinced but this dude spits some soulful shit. Miss Memory is a dope track, which I heard from the grapevine might make MTV, damn, I didn't even know MTV still plays music videos, I thought all they play was whack ass reality t.v. shows.  Anyway, check this dude out.