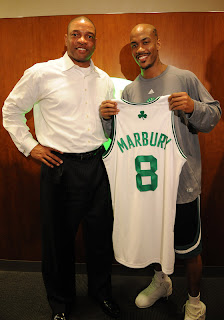 Marbury is and has been one of my favorite players since he has been in the league. I know he has been a cancer to whatever team he has been on but he puts up numbers, is fun to watch, and is always a consistent 88-90 rate on NBA games, haha. And now he's reunited with KG on the Celtics?! I am super hyped! I am going to buy a Marbury Celtic jersey and hopefully KG & Starbury can kill it like they did when they were on the Wolves!