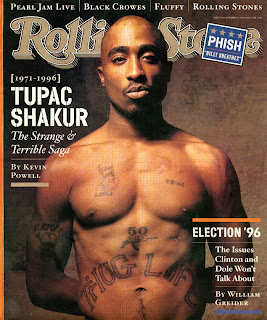 Today is Tupac's birthday. He would have been 38years old. I remember listening to Pac back in elementary school, knowing all the lyrics to every song. In almost every pic I took, I would throw up the "westside" sign, lol. But Tupac got a lot of heat from the media and the masses for his provocative lyrics about women in some songs, his legal issues, sexual activities, etc. But what a lot of people fail to know is that with every song like, "I get around" he had a song that "Dear Mama" to express his love and respect for his mother. If Pac was still alive, I think the music industry would be totally different because his influence was so strong while he was alive and even after he passed, his influenced was still felt. He will forever live on through his music.