All alone on a Sunday morning...

1 comments
So, we didn't finish moving last night until about 3am!! And we're still not done, wtf?! I got hella shit I realized..haha. So now I am at work and Young Rae just walked in and his all serious and shit because his whack ass Cowboys are losing and are going to lose this game..haha. But my 49ers lost today damnit! But we're still 2-2 and we're going to have a promising season. Oh, and my fellow Aptos Tiger & Riordan Crusader, Eric "Showtime" Wright of the Cleveland Browns got his 2nd interception of the season and is on his way to a pro-bowl season and that means Young Rae will owe me some money! Anyway, heres a pic of E. Wright and his 2nd INT of the season. 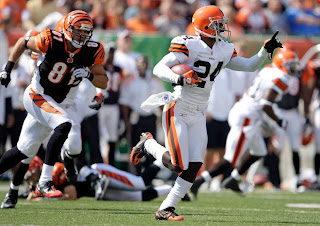 Oh yea, I will be posting up some pics from THRASH hopefully later today after I move some more and clean...what a fun Sunday for me...PEACE!